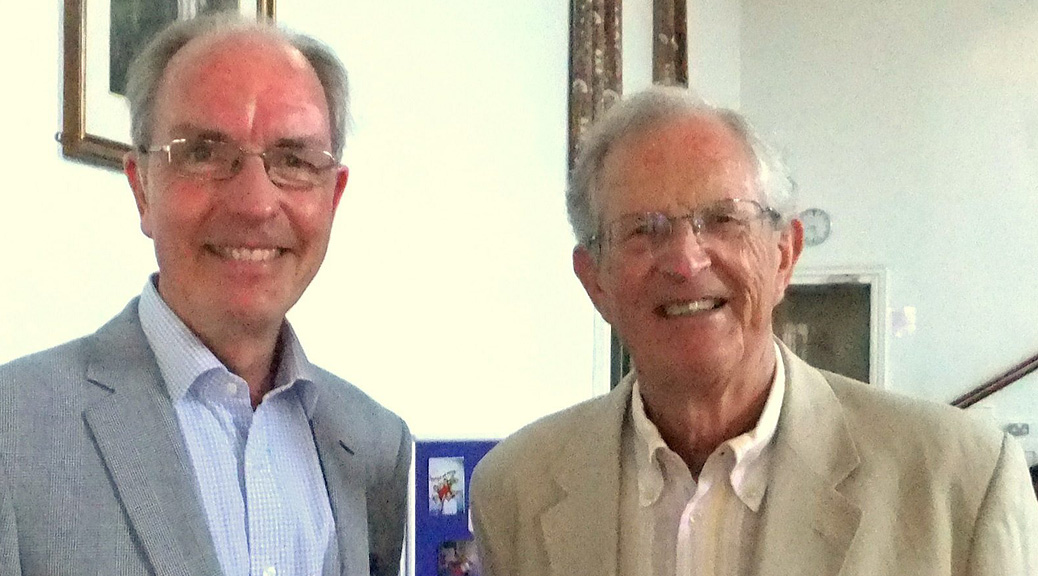 At their AGM in July 2016, the Friends of the Yeatman Hospital saw the retirement of their much-loved Chairman of nine years, Mike Hatch, (seen on right of photograph), and warmly welcomed David Hayes, CBE, as his successor.

Mike worked tirelessly during his nine-year term as Chairman, and helped the Friends secure many improvements at the Hospital.  Amongst the more recent and significant of these has been the establishment of the new Ophthalmology Department, (now fully operational), and the major refurbishment of the Day Room in the Willows.

He was invariably involved in the Friends Fundraising events, and it was hard for anyone to match his energy and commitment.  He has earned a well-deserved rest from Chairman’s duties, but we are delighted to report that Mike has accepted the invitation to become President of the Friends.

David has been active on the Committee since July 2015, and the Friends are very fortunate that he has now become our Chairman.  David served his full career with the Gurkhas, with his final post being Colonel Brigade of Gurkhas.  He has been a trustee of the Gurkha Welfare Trust (GWT) almost consistently since 1997. This Trust delivers welfare and aid to the retired Gurkhas and their communities throughout Nepal, including the issues of welfare pensions, school builds, water projects and medical care.  He has also been involved in developing the Trust’s response to the Nepal earthquake of 2015.

The Friends are fortunate to have such strong leadership, and we do hope that David will enjoy your continued and greatly valued support.